The Birth and Development of Pragmatic Literacy in Moldavia and Wallachia (14th to 16th centuries), by Mariana Goina, Ph.D. (November, 17th, 2011) 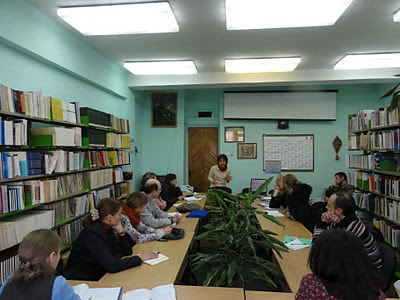 In this study I have tryed to trace the spread of practical literacy in Moldavia and Wallachia
from the end of the fourteenth until the end of the sixteenth century. After the Roman withdrawal
from Dacia there is no evidence for written culture on the territories of the medieval Romanian
Principalities up to the mid-fourteenth century. Indirect evidence suggests an extremely limited use
of writing prior to the establishment of the states. The use of writing was manifest mainly after the
foundation of a central political authority, both in Moldavia and in Wallachia. The surviving data
that indicate the use of documents for practical purposes are mainly restricted to records concerning
land ownership and communications of various kinds.
As land titles constitute by far the largest part of the surviving documents, I have
concentrated first and foremost on the dynamics of the growth of literacy as reflected in the
increasing number of extant land charters. I could see that the dynamics of growth in the number of
documents and their dissemination among various social strata were, especially in Wallachia,
strongly correlated with the changes in land ownership and conflict situations deriving from
traditional land inheritance patterns and the demands of new land owners. In Moldavia the number
of documents seems characterized by a rather monotonous growth, without major inflection points.
While there is a sound expectancy that fewer documents survive from earlier ages, I claim
that the increase in extant documents reflects an actual growth in writing practice that characterizes
the research period. I stress that the formulary of the early documents reflects unsettled writing
practices, while the low value attached to written land titles up to the middle of the sixteenth
century points to a scarce use of written records.
While in Moldova written land titles were granted, received and re-confirmed as a matter of
ordinary business, in Wallachia they seem to have been asked for in extraordinary cases only. These
(specific) cases are recurrent in the documents and have permitted me to identify the factors that
stimulated Wallachian nobility to use written records instead of the customary oral rituals carried
out to perform the same task:
The first increase in the number of Wallachian charters is related to the desire to
avoid defectus seminis through the practices of praefectio (turning a daughter into a
son for the purpose of the law) and fraternal adoption (turning a stranger into a
brother). An additional element here is constituted by attempts to circumvent
customary land succession.
The sixteenth-century process of accumulating land to form great estates owned by
high-ranking noblemen triggered the appeal of writing to small land owners as they
strove to preserve their landed properties against encroachment.
Thus, the analysis of land titles reflects the differences between the written cultures in the
two principalities. While Wallachia entered the scene roughly as a pre-literate society, with a strong
emphasis on customary (oral) legal practices, in Moldavia writing seems to have had a more secure
footing from the onset. The process of transition from collective to individual forms of land
ownership in both cases is one of the reasons for the multiplication of land titles. The specificities of
Wallachia’s social structure brought about major social changes (which are less reflected in
Moldavian documents), namely the formation (during the sixteenth century) of large landed estates
at the expense of small land holders, a social conflict that stimulated a demand for written records.
Publicat de PLURAL la 01:15