Lynne Viola: The “Other Archipelago” of the Gulag System: the Special Settlements 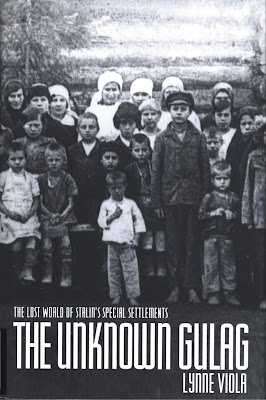 In the early 1930s, Joseph Stalin sent close to two million peasants into internal exile. Entire families were brutally thrown out of their homes, banished from their villages, and transported to the icy hinterlands of the Soviet Union. Once there, they were forced to work as slave laborers for the Soviet industrial effort, living in “special settlements” that they would build from scratch. In the course of the decade, almost a half million people would die as a result of disease, starvation, and exhaustion. This was the first act of Stalinist terror and remained one of the largest episodes of mass repression in the Soviet Union. It established the foundation of the Gulag, Stalin’s vast network of prisons, labor camps, colonies, and special settlements.
The story of the peasant exiles remained long hidden deep in the most classified of Soviet archives. Unlike the intellectuals who were caught up in Stalin’s terror and lived to tell about it, peasant survivors maintained their silence until the reform era of Mikhail Gorbachev in the late 1980s and the fall of the Soviet Union in 1991, living in fear and telling no one their stories. They retained the stigma of “kulak”—the Communist Party’s label for the rural capitalists it had sought to “liquidate as a class” under Stalin.
Based on pioneering research in previously closed central and provincial Communist Party, Soviet state, and secret police archives, Lynne Viola documents for the first time the history of this tragic episode in Soviet history. She delves deeply into the secret world of what long remained an entirely hidden dimension of the Gulag, throwing new light on Stalin’s consolidation of power, the rise of the secret police as a state within the state, and the complex workings of the Soviet system. First and foremost, however, this book documents the day-to-day existence of Stalin’s first victims, telling the stories of the peasant families who experienced one of the Twentieth Century’s most horrific exercises in mass repression.